Lil Wayne and Denise Bidot have unfollowed each other on Instagram, yet again. Denise even shared a cryptic message about someone ‘disappointing’ her, just days after spending New Year’s Eve with the rapper.

Lil Wayne, 38, and Denise Bidot, 34, have set off a new round of split speculation. They unfollowed each other’s Instagram accounts once again, which fans took notice of on Jan. 5. Now, both Lil Wayne and Denise are only following one account each: Lil Wayne is following seven-year-old fashion critic Taylen Biggs, while Denise is following a smaller account. 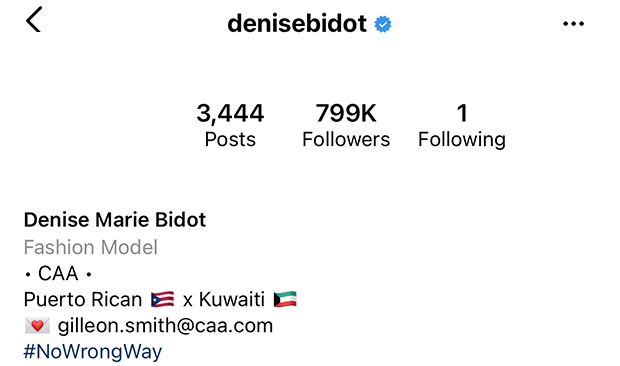 Denise added more fuel to the breakup rumors by sharing a cryptic message on her Instagram Story, which she reposted from a quote account called @happy.girl33. “Pretty disappointing when you defend someone throughout everything and they turn out being just as sh-tty as everyone said they were,” read the mysterious message on Denise’s Instagram. The model even deleted her New Year’s Eve photos with the “A Milli” rapper (you can see a fan account’s repost of the pictures, below).

Fans immediately took to Twitter with their theories. “Looks like Lil Wayne and Denise Bidot have broken up once again,” one such fan wrote over screenshots of Denise’s message and the sole account Lil Wayne is following.

This Instagram activity is happening two months after the original round of breakup rumors, which happened shortly after Lil Wayne met with and publicly endorsed Donald Trump ahead of the Nov. 2020 U.S. presidential election — leading to much controversy and outcry.

Lil Wayne and Denise unfollowed one another on Instagram just days afterwards, and Denise tweeted on Nov. 3, “Wow … can this year be over already.” The very next day, Lil Wayne shared his own cryptic tweet: “I’m a lover not a lighter [because] they burn out. I am an eternal fire and burning love, either leave with a tan, a 3rd degree burn, or stay and die in love. You’re sweating. Sincerely, the fireman.”

By Nov. 30, however, Denise revealed that she and Lil Wayne were still together and spent “Thanksgiving weekend” with one another. A photo of Denise resting her head on Lil Wayne made its way into an Instagram photo roundup of her holiday weekend, which Denise captioned, “Thanksgiving weekend was just perfect. Thankful every single day.”

Lil Wayne and Denise started dating in the beginning of 2020, amid the pandemic. Before Denise, Lil Wayne had dated model La’Tecia Thomas.

Ireland Borba: 5 Things To Know About Gorgeous Model Spotted Out With Tyler Cameron

Rihanna Wants A$AP Rocky To Be Her ‘Final Boyfriend’: Their Romance Is ‘Amazing Right Now’

Rihanna and A$AP Rocky are ‘very happy together’ and have ‘so much in common’, according to sources who spoke EXCLUSIVELY to HL.

It looks like things between Rihanna, 32, and her boyfriend A$AP Rocky, 32, are going great. The singer and rapper, who turned their longtime friendship into romance last year, celebrated Christmas together in her home base of Barbados before recently attending a dinner date in New York City, and it turns out their romance works due to a number of factors, including their compatibility and number of mutual friends.

“Rihanna and Rocky are so good. Their vacation together couldn’t have been better,” a source EXCLUSIVELY told HollywoodLife. “The level of attention their relationship gets is intense, so they’ve been trying to play it pretty low key, but they’re still very happy together.”

Before their recent dinner, RiRi and Rocky attended YAMS Day, which was started by Rocky in honor of his late friend A$AP YAMS, who died at the age of 26 back in 2015. “Rihanna was with him this week on YAMS Day. That was Rocky’s best friend, but Rihanna knew him too,” the source explained. “She’s very much a part of Rocky’s inner circle. His friends are her friends, and her friends are his friends. It’s just one of the reasons this is such a great fit.”

Rihanna, who can be seen in a recent Fenty Beauty promo video below, is also serious when it comes to dating and wants Rocky to be her “final boyfriend”. “Rihanna falls in love fast with who she dates as she really wants her current boyfriend to be her final boyfriend,” a second insider EXCLUSIVELY told us. “She only has vibes for who she is dating and no one can ever break that but the person she is dating and as of right now her relationship with A$AP is solid.”
“Rihanna has dealt with it all from good to great to bad relationships they way things are strolling along is looking very special,” the insider further explained. “The fact that they have the same job per se and many similar friends has made things really work out because they have so much in common. Ri is really all about ASAP, things are just amazing right now. She is in very bright spirits.”

Karl-Anthony Towns is battling COVID-19, but that didn’t stop the Minnesota Timberwolves player from surprising Jordyn Woods with thoughtful gifts.

Jordyn Woods really does have “the sweetest boyfriend,” which she gushed on her Jan. 21st Instagram Story. That’s because the 23-year-old model and actress’s boyfriend, Karl-Anthony Towns, surprised her with two luxury presents: a pair of Chrome Hearts jeans marked with the brand’s iconic cross logo, and a romantic “Love Is Us” Vetements hoodie. Even more impressive is the fact that Karl organized this thoughtful gesture while battling COVID-19.

“I have the sweetest boyfriend,” Jordyn wrote over her surprises, adding, “Sending me things even when he’s sick.” Jordyn’s teenage sister, Jodie Woods, was just as impressed with Karl’s presents. She posted them on her own Instagram Story and wrote, “karl is the sweetest boyfriend [emojis] really just sent her some chrome jeans and this vetements hoodie that made him think of her, BRO MY HEARTTTTT.”

Karl revealed his COVID-19 diagnosis on Jan. 15, on the very same day his team’s game against the Memphis Grizzlies was postponed. “Prior to tonight’s game, I received yet another awful call that I tested positive for COVID. I will immediately isolate and follow every protocol. I pray every day that this nightmare of a virus will subside and I beg everyone to continue to take it seriously by taking all of the necessary precautions. We cannot stop the spread of this virus alone, it must be a group effort by all of us.”

Karl added that it “breaks [his] heart” that his “family, and particularly [his] father and sister continue to suffer from the anxiety that comes along with this diagnosis as we know all too well what the end result could be.” On a heartbreaking note, Karl vowed to his niece and nephew Jolani and Max that he won’t “end up in a box next to grandma,” a reference to the heartbreaking fact that Karl lost his mother Jacqueline Cruz-Towns to COVID-19 in April of 2020. Jordyn had helped Karl through this tragic time as a supportive friend before they started dating in the fall of 2020.

Once again, Jordyn is showing her support to Karl, too. Jordyn urged fans to “please send some prayers up” after her boyfriend revealed his diagnosis last Friday. As you can see, Jordyn and Karl are a tight unit — but they’re not rushing anything. “Of course, one day in the future I would like to have a time to settle down and have a family of my own. But right now I don’t want things to go way too fast,” Jordyn EXCLUSIVELY told HollywoodLife in Oct. 2020.

These stars aren’t afraid to get a little cold in order to work super hot outfits! Check out stars like Keke Palmer, Kendall Jenner and more who are rocking crop tops during winter!

It might be the coldest time of the year, but these stars have found a way to heat up the world of fashion with one particularly bold trend. Yes, celebrities are sporting crop tops during winter! Not only are the stars rocking this type of garment when it’s chilly, their pairing their tops for the perfect winter look on the red carpet, out and about, and for more events. Let’s check out some of the very best winter crop top styles!

Is that Keanu Reeves? Nope, it’s Kendall Jenner! The young Keeping Up With The Kardashians star gave off major vibes of The Matrix when she was spotted out and about in SoHo. Kendall sported an all black look with her garb, including a long leather trench coat, and white sneakers while she was out and about. Fans could just glimpse the cute black crop top that she was wearing beneath her coat. She looked incredibly fab!

Another star who loves a crop top is Ariana Grande. The singer looked amazing at the 2016 American Music Awards in November of that year. She wore a pair of high-waisted white pants with an intricately embroidered crop top. Donning her signature high ponytail, this look was all Ari and fans totally loved it.

One fierce and fab fashionista whom we adore is none other than Keke Palmer! This accomplished young actress and TV host knows how to make a look work. On February 10, 2018, Keke stepped out during New York Fashion week and put her best (fashion) foot forward. She looked amazing in her electric blue crop top with sheer black short sleeves and a high-waisted black and blue matching skirt. Although the temperatures were likely freezing, Keke was red hot!

Naturally, there are so many more stars who’ve been spotted wearing crop tops during winter. Check out the gallery of images above to see more celebs in this bold trend!